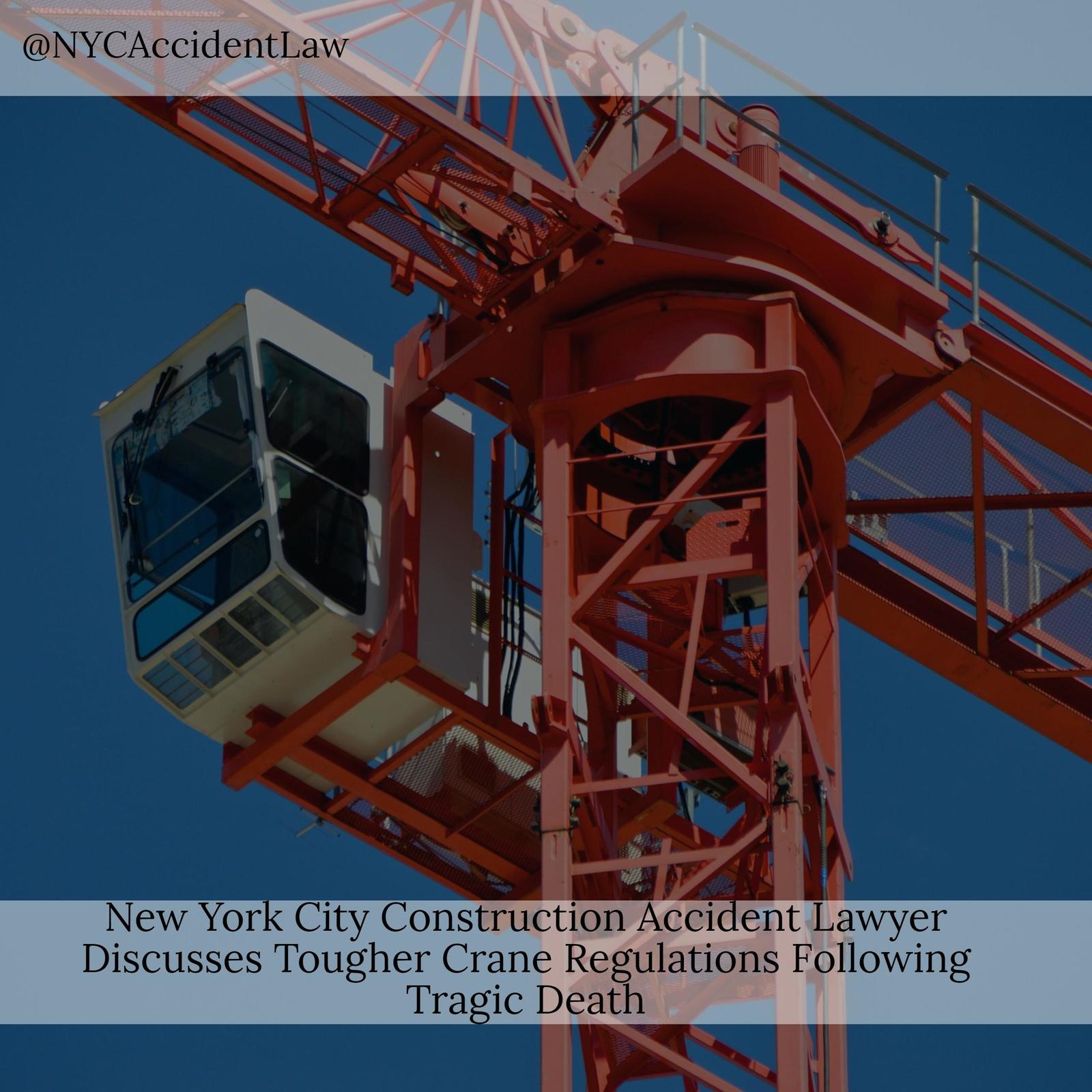 Recently, the NYC Department of Buildings released a report stating that a deadly crane collapse in February 2016 was caused by human error. The massive 565-foot crane crashed into the street, killing one man, injuring three pedestrians, and crushing several cars. The carnage extended over two city blocks. Emergency responders stated they were shocked that the accident didn’t cause more deaths or injuries.

The Department of Buildings report states that the crane’s operator failed to secure the crane the night before during high winds, then lowered the boom at an incorrect angle — both of which caused the crane to become unstable. As a result, the operator’s license was suspended.

After the accident, the Department of Buildings announced tougher regulations for crane operations, including mandatory prohibition of any crane operation when winds are greater than 30 miles per hour.

Additionally, the new regulations require a licensed engineer to be present for any operation of a crawler crane rated for less than 30 mph winds.

The new regulations have been challenged in a lawsuit filed by several construction groups. The groups say the mandatory shut-down provision requiring cranes to stop operating once winds reach 30 miles per hour is not based on any scientific research. The lawsuit also challenges the requirement of a lift director being present on any site where a crane is being operated.

Sadly, there have been other deadly crane accidents in New York City, including a catastrophic accident that took the lives of two construction workers in November 2016. The workers were killed with a beam they were lifting when a crane caught on part of a building, causing the cable holding the beam to snap and crash into the crane.

New York City construction accident lawyer Jonathan C. Reiter explains, “As one of the biggest cities in the world, New York City is always under construction. There are construction crews in many spots around the city, and they use heavy, dangerous equipment. The margin of error for this equipment is incredibly small — just one mistake can cost a person their life. Safety regulations are put in place to make sure pedestrians and others are protected from avoidable accidents.”

The above review statements are those of the sponsor (Source of content) and do not necessarily reflect the official policy, position or views of the content publisher. The content distribution company is therefore not responsible for the content and its authenticity and legal standing of the above subject matter. Each individual is required to exercise its content when making a purchase from the above offer. The information does not constitute advice or an offer to buy. Any purchase made from the above press release is made at your own risk. Editorial merit of this content is subject to news publisher and its downstream partners. Consult an expert advisor/health and professional advisor before any such purchase. Any purchase made from this link is subject to the final terms and conditions of the website's selling as mentioned in the above as source. The content publisher and its downstream distribution partners do not take any responsibility directly or indirectly. If you have any complaints or copyright issues related to this article, kindly contact the company this news is about.

DISCLAIMER of Liability. IN NO EVENT SHALL OUR PR COMPANY BE LIABLE OR RESPONSIBLE TO YOU OR ANY OTHER PERSON FOR ANY DIRECT, INDIRECT, INCIDENTAL, CONSEQUENTIAL, SPECIAL, OR EXEMPLARY DAMAGES OF ANY KIND, INCLUDING WITHOUT LIMITATION, LOST PROFITS OR LOST OPPORTUNITIES, EVEN IF ADVISED OF THE POSSIBILITY OF SUCH DAMAGES IN ADVANCE AND REGARDLESS OF THE CAUSE OF ACTION UPON WHICH ANY SUCH CLAIM IS BASED, INCLUDING, WITHOUT LIMITATION, ANY CLAIM ARISING OUT OF OR IN CONNECTION WITH ANY OF THE CONTENT, INCLUDING, WITHOUT LIMITATION, AUDIO, PHOTOGRAPHS, AND VIDEOS, OR OF THE ACCURACY, RELIABILITY, OR LEGALITY OF ANY STATEMENT MADE IN OR OMITTED FROM ANY advertisement, sponsorship, endorsement, testimonial, opinion, or other product-related or service-related statement or review appearing in the Websites or in ANY post or article distributed via the Websites.